ABOVE: Sensational gang reveal, first used to call girls, then tricked and

The Qutubsher Police Station in Saharanpur in Uttar Pradesh has discovered a gang. This gang used to mislead people by pretending to get easy low inte

ABOVE: Sensational gang reveal, first used to call girls, then tricked and 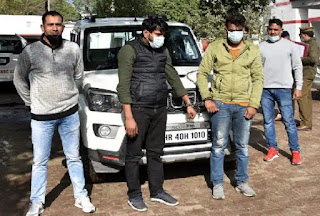 The Qutubsher Police Station in Saharanpur in Uttar Pradesh has discovered a gang. This gang used to mislead people by pretending to get easy low interest rate loans. Two members of this gang have been arrested.

A young man was said to have committed suicide in the police station area after being caught in the trap of the same gang. Police approached these thugs based on leads from their family. The police have found about 20 gang members. They have been deceiving people from Haryana, Chandigarh and Delhi. Scorpio, cell phone and a bank check have been recovered from the possession of the accused.

SP City Vineet Bhatnagar said that on December 25, Shubham committed suicide in the village of Unali after Shubham was caught in the trap of scammers in order to obtain a loan at an anticipated rate. According to his family, he cheated him 1.5 lakh rupees. In the investigation of this case, it was discovered that some people have fraud businesses in other states, including Haryana.

Police in charge Vinod Kumar Singh and other police and surveillance teams arrested the accused. Among the accused are the leader of the Kuldeep gang, the Sisavi Police Station, Hansi Hisar Haryana, and the city of Ravi Kumar, a resident of the Assandh district, Karnal Haryana. The gang's leader, Kuldeep, lived these days in the New Chaudhary compound, Chandigarh's parcel number three.

Accounts with false documents were opened

The defendants said that they had opened accounts at other banks, including Karnal, Kurukshetra in Haryana, with the help of fake IDs and other necessary documents. In the name of loans through accounts, money was scammed. Calls, SMS and email from different phone numbers used to catch people. Previously, victims used to deposit money including GST, settlement fee, user fee, premium fee, processing fees, and many other ways. Some of the funds raised were used to pay interest to people by lending them a small amount. They have been active for two years now.

Gangs are most active in Karnal, Kurukshetra, Assandh, Hisar, Chandigarh

According to SP City, most of the gang members are active in Chandigarh apart from the cities of Haryana Karnal, Kurukshetra, Assandh and Hisar. From here, they have been taking people on behalf of loans in the cities of UP. Police are trying to find out how many people have been duped by the gang so far.

I used to call the girls from Delhi

According to the defendants, Pooja, Khushboo, Sonia, Suman and residents of different areas of Delhi were called to the clients through other women. Sometimes money was also requested from customers through online banking, online.

The names of these gang members also came to light