SSP Kalanidhi Naithani said the accused contractor is conducting a detailed questioning. Instructions have been given to take strict measures against 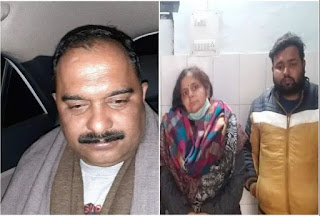 Contractor Ajay Tyagi, the main defendant responsible for the deaths of 24 people due to the collapse of the roof at the ghat crematorium in Muradnagar, entered police custody Monday night after 36 hours. Three hours before his arrest, the SSP had announced a reward of 25,000.

SSP Kalanidhi Naithani said the accused contractor is conducting a detailed questioning. Instructions have been given to take strict measures against all defendants detained in the strictest sections.

Ajay Tyagi, the contractor who builds the crematorium's crematorium, lives in Rajnagar Sector-7. He has a fancy kothi with the number D-57. Ajay Tyagi left his house and escaped as soon as the ceiling of the crematorium corridor fell on Sunday. Police arrived at his home Sunday night after being identified in the case, but no one was found there.


Police found his Fortuner car parked outside the home, in which police were drilled and posted. SSP had announced a reward of 25,000 to Ajay Tyagi at 8:30 pm Monday night. Four police teams were looking for him. Ajay Tyagi got into the hands of the police around 11:30 pm. Police say he will be presented in court on Tuesday and sent to jail.

Menagat was left open in panic

Ajay Tyagi closed all the doors of the house in his path, but in a hurry the door of the man's house was left open. When the police found the door open, there was hope that the family members were inside, but due to the closing of the inner door, there was despair.

Work dedicated to relatives and relatives

Updates were being received from Lucknow and Delhi on the tragic accident. Together with the Chief Minister, the President and the Prime Minister had also learned of the incident. Police arrested three officers, including EO, who were named in the case Monday morning, but contractor Ajay Tyagi was outside the warehouse.

Due to pressure from superior officers, the police were challenged to catch him. To do this, the police put pressure on the contractor's relatives and relatives. This pressure worked and Ajay Tyagi came under the command of the police.


The property will be attached, the license will also be canceled

Villagers repeatedly demanded strict action against those responsible for the incident by laying bodies on the road. On this, IG and SSP said that strict measures are being taken against the culprits associated with the incident. Property illegally acquired by the accused will be seized. In addition, the accused who has a weapons license will also be revoked.

Officials also said there are currently four named in the case. Whoever is found guilty in the investigation will be arrested and sent to jail.