Players will be able to download the latest version from Google Play Store and App Store, the update will be a 660MB download for Android 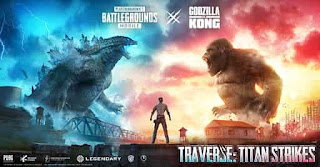 To give everyone a better gaming experience, PUBG MOBILE will release the update starting on May 11

The New server will not go offline for this updates.

The iOS version requires 1.67 GB.  Please note that players of different versions cannot connect with each other, so update as soon as possible.

They have killed mysterious titans and demons are rising from beneath the Earth's surface and making settlements!  Experience the shock and excitement of seeing the Titans up close on the map!  There are a total of three mysterious titans that can be found on Erangel, Sunhawk, and Livick respectively.  Once the game is available, an entry will appear on the map.  Simply select the entry to start the game. 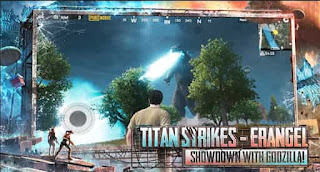 The Titans would first make an impressive entrance to Spawn Island.  After combat begins,

The Titan will begin moving along a random path across the map and interact with the newly added monster camps and settlements.

Attack of the Titans:

When Titan moves through a colony of monsters, his natural instinct is controlled and he will have no mercy on the underground monsters at his feet.

The Titans have no memories of the Apex Expeditionary Army, so they will destroy all Apex camps in their own way.

While Titans are not typically hostile to players, any number of players anywhere can annoy them.  Beware of the attacks of a strange giant!

Titans slowly absorb the energy emanating from the Earth.

The Once the energy reaches a certain threshold, new the titans release it and form titan crystals around it. Different types of New War Titan crystals have different effects.

Erangel Titan Crystal - A special throwable item that kills enemies and burns them.

Sanhawk Titan Crystal - A special crystal that increases a player's abilities, such as speed and jump height. 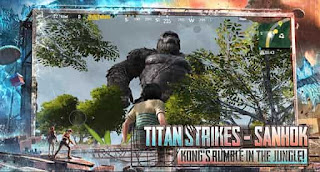 Monsters living underground are drawn to the surface by energy radiated by the Titans. They are hostile and will attack players who become very close. Defeating these monsters can generate useful rewards and resources.

Titan in Livik has unique electromagnetic capabilities that affect the blue zone and cause it to change from time to time. Titan's electromagnetic energy creates a special scanning circle that the player can enter to collect Titan crystals. However, doing so will expose your position to other players as well.

The Monarch Expeditionary team boarded an aircraft vessel in search of Godzilla's trail at sea. Little hoped that they would get caught up in a fight between the Titans.

A helicopter will appear in the lobby user interface. Enter and tap on the helicopter to start playing Titan Last Stand. Points earned during the event can be used in lieu of the award of the event.

Transform into a mini insect, stay out of sight, go through the wormhole and experience the magical micro world! Just make sure to avoid the sun!

Five labs will appear in Erangel, each with multiple interactive installations. To miniaturize yourself into an insect by interacting with a quantum transformation device in Labs. (Pesticides can also fly less!) 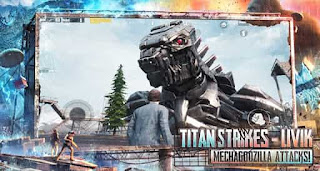 After being transformed into an insect, players will receive a special insecticide weapon that will allow them to participate in battles with other insecticides. While insects may not be injured by ammo, they can still be harmed by pans.

Insectoids have a special visual capability that allows them to see scattered publishers across all maps. Gather the Illuminators and exchange them at the power store for war supplies, or use them to open the wormhole and travel from lab to lab.

Quantum Transformation Device: Players can use this device to transform into an insect or return to normal size.

Wormhole Device: Players can use their Illuminator to open a wormhole and use it to move from one lab to another.

A hangar on a huge ship floating in the vast sea. With multiple decks, players can step outside and begin the fun. A tense and fast-paced battlefield, offers a variety of tactical options: get up close and personal, or stay behind. But whatever you do, you will not survive without quick response and spontaneous collaboration with your peers.

Team Deathmatch - Unlimited Response. +1 points to players who overcome enemies, and the first team to eliminate the enemy's target number of wins.

Team Weapon Play - All players start with a single weapon, which can be upgraded by eliminating opponents. The winner is the first team to finish the final weapon, the Pan, or the team with the highest score on that team, when the countdown ends. 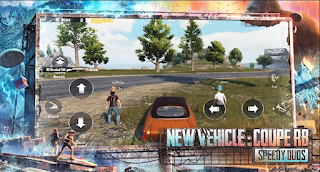 Following the update, Metro Royal and Power Armor modes will be cut for improvements and will return at a later date.

The new two-seater sports car, the Coupe RB, has space for you and a friend, but only one, to enjoy a quick run.

One of the fastest vehicles available in Battle Royal Mode.

Keep an eye on the RB coupe in Erangel, Miramar, Sanhok, and Livik.

The M249's fire rate and damage have been reduced slightly. Its repetition has been increased and its magazine capacity has been reduced from 100 to 75.

The New magazine and new magazine accessories have been added, Pubg 1.4 New which can be equipped to increase the speed and reload capacity of the M249. With the largest magazine capacity, it can hold up to 150 rounds.

The M249 can also be equipped with a tact stock to help control recall and improve stability.

In the new version, there are greater incentives for researchers to use the video review feature in the security field. Players who have attained the rank of Master Investigator will be awarded the title of Permanent Elite Investigator. They can land on the battlefield with this title to show their achievements.

Video reviews have also been updated. New material is awaited for the players, and the research team will continue to expand. 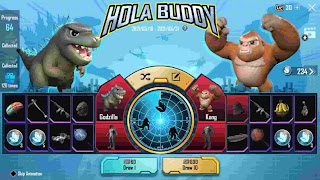 Increased safety detection for the All-Talent Championship, in which oversight and penalties will be dynamically adjusted to meet various online conditions.

Added inheritance achievement system; Players will not lose any legacy achievements they have already unlocked; However, inherited achievements cannot be obtained after deletion.

Players can directly view new stores and supply materials in the message manager. The message count screen has also been updated.

The synergy can now be displayed on the player information card for the teams and on the match results page. Players can tell what kind of coordination they want to show first. If the player does not specify a preference, then his teammates with the highest synergy will appear first.

The gift from BP will be upgraded to a higher value gift from Synergy Connections.

Awards have been added for Tier. Players can now receive rewards immediately after reaching a level

The level screen has been updated to increase the sense of achievement to reach a new level.

Participating in the All-Talent Championship will now be counted towards completing daily combat campaigns.

Great adventure for the little ones!

Take a break from the microcosm for its new season: Insect Queen-Mini 14 and Wonderland-AKM will be ready for tombs, and players can choose between the Insect Queen set or the General Beetle set for over 30,000 CUS.

Choose a faction and open a custom RP 3rd anniversary box - 6 special weapons from previous seasons are back, so choose your box!

The rp file is here, so other players can see their progress and previous seasons.

Many more PR badges. With more exclusive perks to come, keep buying RP to unlock them!

In the exploration event, players can choose one of two lavas. 100 games. Also in play are Wonderland Motorcycle and General Thompson SMG Beetle. Players can quickly purchase event gift packs to earn levels, and then collect mission activity points to recover all of their CUs.

New search content and seasonal content have been added, bugs have been fixed, and updates have been made.

A new graffiti wall has been added and the Ferris wheel has now been updated to rotate automatically.

Three weapons, MK12, M1014 and FEMAS have been added to the training ground and animator park to try and practice them.

Friend Status: Players can interact with their friends by liking or commenting on their status updates.

Popular Law: Players are informed of the most popular situations in their moments of friendship, ensuring that they keep up-to-date with trends.

In-Game Album: A new album feature has been added. Players can now store screenshots of the game in the album.

New online status options "free", "busy" and "invisible" can be configured in the Friends sidebar.

The status can only be set to invisible 3 days a week.