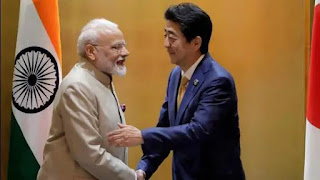 The visit is expected to last less than a day. Modi will also be among the world leaders who are expected to separately call on Abe's widow, people familiar with the matter said.

"As you know, there was a personal connect with former prime minister Shinzo Abe," he said.

He played a pioneering role in the establishment of the Quadrilateral Security Dialogue or Quad, which groups Australia, India, Japan and the US, and in pushing a vision for a free and open Indo-Pacific region.

India had declared a day of state mourning to pay tribute to Abe, who also played a major role in elevating India-Japan relations and enhancing cooperation in many fields.

In a message issued shortly after the Japanese leader's death, Modi had described Abe as "a towering global statesman, an outstanding leader, and a remarkable administrator".