Adipurush Movie got banned : There was uproar over Prabhas' 'Adipurush', now Hindu Sena raised the demand for ban

New Delhi: The matter of the controversial film 'Adipurush' has reached the court. A petition has been filed in a Delhi court seeking 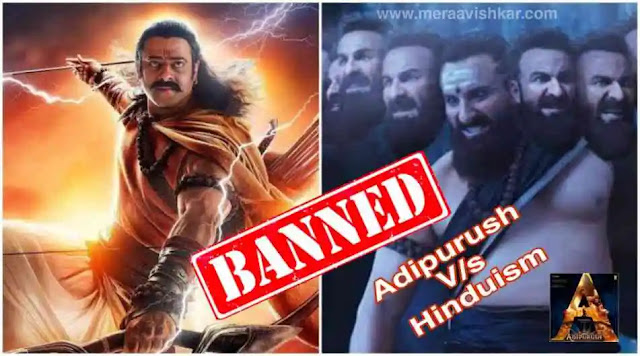 New Delhi: The matter of the controversial film 'Adipurush' has reached the court. A petition has been filed in a Delhi court seeking a stay on the upcoming film 'Adipurush'. The petition alleged that Hindu deities have been shown in an "inappropriate" and "wrong" manner in the video released to promote the film. The petition, filed by advocate Raj Gaurav, has been listed for hearing on Monday before senior civil judge Abhishek Kumar.

Adipurush Movie got banned : There was uproar over Prabhas' 'Adipurush', now Hindu Sena raised the demand for ban

After the release of the teaser of Prabhas and Kriti Sanon starrer 'Adipurush', the demand for the ban of the film has started rising rapidly. Hindu Sena President Vishnu Gupta has sent a letter to the Information Broadcasting Secretary demanding the ban of the film.

Why is Adipurush getting banned?

Ban Adipurush: Ever since the teaser of South Superstar Prabhas and Kriti Sanon starrer 'Adipurush' has been released, it has been in constant discussion. While users have raised questions on the VFX of the film and the look of the actors, many political organizations have also come against the film.

After the teaser of 'Adipurush' came out in Madhya Pradesh, the demand for ban on the film has already been raised and now Hindu Sena President Vishnu Gupta has also done something similar. Vishnu Gupta has sent a letter to the Information Broadcasting Secretary demanding the ban of the film. 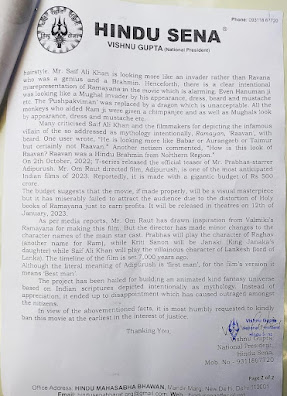 Ram was shown angry, Hanuman was shown as tyrannical. the case of the film 'Adipurush' has now reached the court

Ever since the teaser of Prabhas's film Aadipurush has been released, questions have been raised on the film. Many people and politicians have objected to the role of Lord Ram, Hanuman and Ravana in the film. He says that the sentiments of Hindus have been hurt by seeing this. Now the matter has reached the court.

The petition has sought a permanent and mandatory stay order against the respondents - producer Bhushan Kumar and director and co-producer Om Raut.

The petition alleges that the producer-director has manipulated the basics of the epic Ramayana. "The Respondents have hurt the religious, cultural, historical and civilizational sentiments of the plaintiff and other Hindus by depicting Hindu deities Lord Rama and Lord Hanuman in the teaser or promotional video of their upcoming film 'Adipurush'," the petition claimed. '

The petition alleged that the traditional image of Lord Rama was that of a serene and calm man who believed in forgiveness, but in the promotional video the defendants dressed as leather straps and modern shoes made of leather were 'tyrant, vindictive and Shown as an angry person.

The petition also claimed that Lord Hanuman is depicted in an 'atrocious manner', wearing leather bandages all over his body and depicting him differently from the religious verses of the Hanuman Chalisa.

The petition said that the court should impose a permanent stay on the release of the film in its present form to prevent the respondent from depicting Lord Rama and Lord Hanuman. The petitioner has also sought a direction to the respondents to remove the promotional video of the film from all social media platforms.