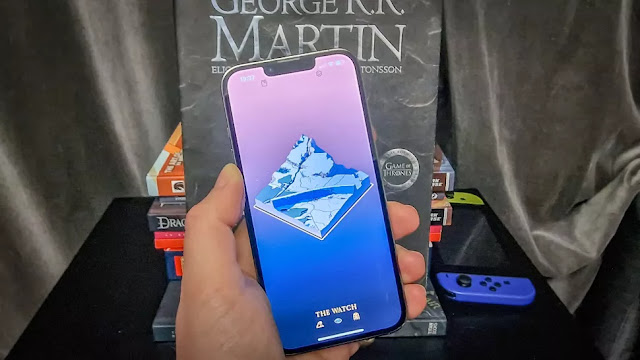 It’s fair to say that the end of Game of Thrones left a sour taste in people’s mouths, myself included. But my appetite for more tales from Westeros and the world of Ice and Fire was stoked again with the rather good House of the Dragon. But that series is over and I’ve got a Drogon-sized hole to fill.

Gaming often performs a fantastic job of providing a tie-in to grab one's attention (for instance, Marvel Snap appeared when phase four of the MCU came to an end). Even while there is numerous Game of Thrones video games available, few of them have caught my eye or received positive reviews, especially when it comes to mobile gaming. However, the oh-so-stylish Game of Thrones: Tale of Crows on Apple Arcade defies that trend.

Created by That Silly Studio and published by indie game darling Devolver Digital, Tale of Crows is an Apple Arcade exclusive that’s playable on Macs, iPhones, iPads, and Apple TVs. It works across these platforms, as it’s not an action-packed or movement-heavy game like some other Apple Arcade titles.

Rather, Tale of Crows is what’s commonly referred to as an ‘idle game’ in that you carry out a few tasks, then leave the game to its own devices while those objectives are completed.

In practice Tale of Crows does this by centering on Westeros’ Wall, a giant barrier of ice and rock designed to separate the wild lands of the north from the more civilized lands of the south.

The narrative of Tale of Crows centers on the recounting of a tale that occurred before the events of Game of Thrones, when the Night's Watch, who protect the Wall, was in a comparatively strong position. Players take on the role of the Lord Commander, managing chores and issues as they arise, such as a visitor with bad news or the requirement to deploy rangers beyond the Wall.

This narrative is conveyed through text prompts and rapid choices, with light ambient music, leaving the lack of cutscenes to your imagination. Being forced to make difficult decisions when the apparent right answer is rarely, if ever, clear makes it strangely compelling.

That’s not to say you’ve got nothing but the text to look at. Quite the opposite. Tale of Crows presents a minimal interface centered around a picture of the Wall — drawn in a scratchy fashion as if done with pencils rather than digital paint — a map, and a close-up of Castle Black, the main headquarters of the Night’s Watch.

Soft, almost ethereal music plays as you zoom in to examine different sections of the Wall, along with wind noises and the occasional crack of a bird call.

The latter is when there is activity interspersed with stillness or idleness. When a raven comes, new information is sent with it, such as a report from rangers or a call for assistance from nearby castles along the Wall.

A fresh image, such as one of a remote area of the wilds or a mountainside covered in rain, may be revealed in messages from beyond the Wall, making them very interesting.

These messages are both intriguing, and flesh out the world beyond Castle Black on both sides of the Wall. But they can also contain dark words, with an air of mystery and threat. And sometimes outright battle with the White Walkers.

This really sets the scene and I found myself pulled back into the land of Westeros and its northern struggles, despite the main TV series ending more than three years ago.

And the idle nature of Tale of Crows means you can easily dip in and out, whether you're on a commute or just want something to do while you sip a morning coffee. In fact, I reckon it would make a great partner to the books; send off a bunch of ravens in Tale of Crows, and while you’re waiting for them to return, dig into the tales of Tyrion, Arya, Brienne, Ned, and more.

The chilled music alone makes Tale of Crows a good game to have on in the background on one’s iPhone or iPad, though it also looks great on my MacBook Air M2.

So if like me you’re after a bit of a GoT fix while waiting for George R.R. Martin to finally complete The Winds of Winter, then I compel you to give Game of Thrones: Tale of Crows a go on Apple Arcade.

If you're not a Game of Thrones fan then there are other compelling Apple Arcade exclusives, such as the weapon-grade nostalgia hit that's Lego Builders Journey, and Bleak Sword — a low-fi pseudo-Dark Souls game that'll suck you in with just a few swipes.