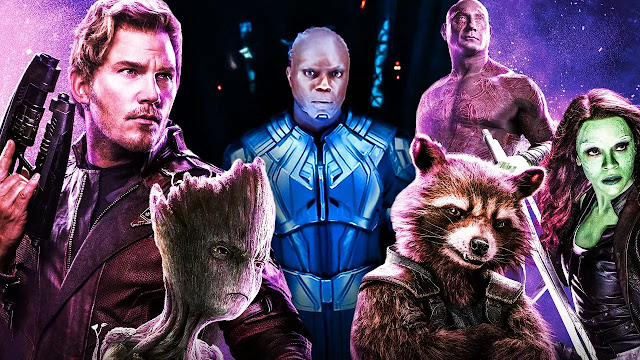 New Guardians of the Galaxy's Vol. 3 footage suggests the film's villain may have already experimented on a Guardians character.

Throughout filming, both director James Gunn and the Guardians cast promised an emotional threequel and one centered on Rocket.

But now, Marvel fans just got an idea of how truly emotional this third film will be thanks to a new trailer featuring glimpses at Rocket's past and Vol. 3's villain.

The latest Guardians of the Galaxy Vol. 3 trailers revealed at CCXP 2022 offered another look at the villainous High Evolutionary and his role in the threequel.

Played by Chukwudi Iwuji, the High Evolutionary is a Marvel comic book villain with a history of abuse and experimentation.

While Vol. 3 footage has teased Rocket's own history with the High Evolutionary, as evidenced by the images of a Baby Rocket before he had been experimented on, the film may explore more of the villain's past acts.

In fact, the new trailer appeared to show Half-World, Rocket's comic book planet of origin, which is populated by animal-human enhanced hybrids.

But that's not all. The footage may have also offered a first look at Lylla, an associate of Rocket's mentioned in the first Guardians of the Galaxy and who appears to have been another of the High Evolutionary's experiments.

In the comics, Lylla is a sapient otter and Rocket's soulmate.

In 2014's Guardians of the Galaxy, her name appeared on Rocket's profile when he was apprehended by the Nova Corps.

There was also speculation that she would've appeared in the Guardians of the Galaxy video game, which originally intended to explore Rocket's backstory, much like what Vol. 3 now intends to do.

Ella's presence confirms that Rocket's history with the High Evolutionary isn't just limited to what happened to himself, but perhaps the friends and family he had prior to meeting the Guardians.

Whether Lylla's role is limited to that of flashbacks, or if Vol. 3 will involve a rescue mission, remains to be seen.

Be sure to check out every CCXP announcement here for additional Marvel Studios news.

Is the High Evolutionary a villain?

But despite a few heroics, High Evolutionary has mostly been a villain due to his knack for playing God with his creations. And as teased by Chukwudi Iwuji's stint at SDCC 2022, he is the absolute worst even in the MCU

Is Guardians 3 the last one?

Marvel has shared the official trailer for Guardians of the Galaxy Vol. 3, and it looks like fired and rehired director James Gunn is determined to make fans emotional. This is the last movie in his intergalactic trilogy, and there's a fitting air of finality to the two-minute clip

Is Warlock a villain?

Adam Warlock is often portrayed as both an anti-hero and both as a protagonist, and very minor times as a villain.

Who is the enemy in Guardians of the Galaxy?