The biggest mystery of Ankita Bhandari's murder became a challenge to solve! Read Inside Story

The biggest mystery of Ankita Bhandari's murder became a challenge to solve! Read Inside Story 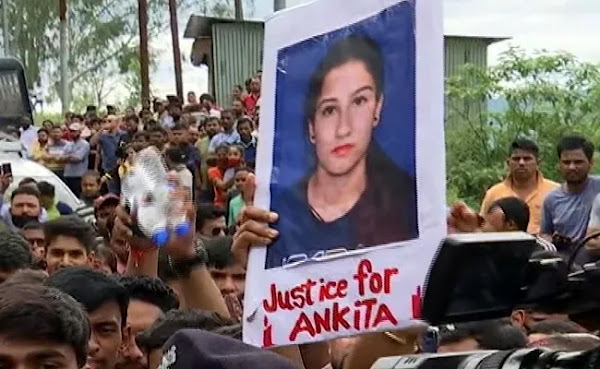 The police have submitted the charge sheet in accordance with the deadline in the Pauri district of Uttarakhand in relation to the murder of Ankita Bhandari. Even now, however, there is still a mystery surrounding this murder case: who was the VIP to whom Ankita Bhandari provided the "additional service" that caused her to pass away prematurely?

Even though an SIT, or special investigation unit, has been established by the Uttarakhand government to look into this topic, this SIT has not been able to discover answers to any of these inquiries, even now, some three months after the occurrence.

Read New:- With 10 sex chromosomes and a mixture of 3 types of biological characteristics

After all, who else does the Uttarakhand Police have when the Special Investigation Team established to look into this shocking murder case hasn't been able to get answers to these two queries from the alleged accusers Pulkit, Ankit, and Saurabh? Thus, the only remaining mantra or cure-all is,

in order to uncover the additional service and covert VIP involved in Ankita's murder. Meaning that Ankita and her family have received justice just by the SIT submitting a charge sheet in the Ankita murder case. Saying that would be incorrect.

Only after the accused murderers are found guilty by the jury at the conclusion of the trial is justice considered to have been rendered, acknowledged, and understood. Even ghosts are reported to flee in front of the police.

A supplementary charge sheet will be filed if needed

The culprit in the Ankita Bhandari murder case refused to acknowledge the motive for the crime for three months, according to the Uttarakhand police. Therefore, it should be assumed that the police in this case mistook the accused for being powerful and the law for being weak.

Read New:- Pensions may continue to increase in 2023. The five types of people will increase more, but the third type will not. Really?

And as a result of this failure, the SIT that the Uttarakhand Police formed to look into the problem immediately began screaming that, if necessary, it would also submit a supplemental charge sheet in this case as soon as the charge sheet was filed in court.

'Will not give extra service to VIPs in the resort'

The issue of providing VIPs with additional service has not been brought to the attention of the Uttarakhand Police. This was disclosed during a text conversation between Ankita Bhandari and her buddy Pushpdeep. Ankita had already informed Pushpdeep that she was being requested to give special treatment to resort VIPs. which she was unwilling to give up at any price. Later, though, the police began to view this extra service as prostitution.

Because of this, the police added a section on prostitution to the murder case after registering it. When the police were informed that Ankita Bhandari had been forced into prostitution, the question arose as to why the SIT of the Uttarakhand Police was unable to persuade the three defendants to reveal the identity of the VIP who had been coerced into providing Ankita Bhandari with additional services.

Once Ankita declined to provide further service to that unidentified VIP. She was killed. It is vital to note that Ankita Bhandari was reportedly murdered on September 18, 2022, by Pulkit Arya, the proprietor of the Vanantara (Vanantara) Resort in Ganga Bhogpur, Yamkeshwar, and the Pauri Garhwal area of Uttarakhand.

Ankita was dropped dead into a canal with deep water. Later, the accused also filed a missing report on the disappearance of Ankita Bhandari in an effort to deceive the legal system. The Uttarakhand Police, however, thwarted his scheme. On September 24, 2022, a corpse belonging to Ankita was found in the Chilla canal close to Rishikesh.

Mention of unethical business prevention sections in the chargesheet

However, the SIT of the Uttarakhand Police filed a charge sheet in this matter on Monday. The court of Judicial Magistrate First Class Kotdwar Bhavna Pandey has received this charge sheet.

Read More:- Georgia voters once again have the last word during election season

Jitendra Rawat, the assistant district government attorney, reaffirmed this on Monday. He claimed that the submitted charge sheet is around 500 pages long. and has 97 witnesses listed. More than 30 papers have been grouped together and included in the charge sheet as proof.

The imposition of provisions for the prevention of unethical business is also included in the filed charge sheet. P Renuka Devi, the deputy inspector general for law and order of the Uttarakhand Police, has been appointed to lead the SIT setup to look into the situation.