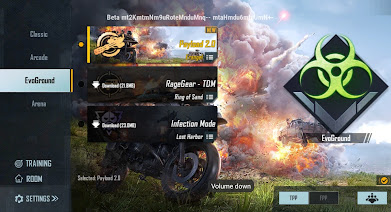 Also Related : PUBG Beta 0.19.0 Update Global Version Top Glitches.
In this PUBG Mobile 1.0.4 beta update they made improvements on Infection mode and Payload 2.0. The Halloween Infection mode will available from 23rd October whereas there is no update about released date of Payload 2.0 but it will be available after 23rd October.
Also Check : Super Smash Bros. Ultimate Minecraft release date revealed.
Players can play this beta version and send their feedback to the game developers if any modifications necessary.

The game developers will consider yours feedback and make changes according to that in the global version.
Also Related : PUBG Mobile 1.0.4 Update download OBB file for Android.
The size of this update is around 1.50 GB players can download PUBG Mobile 1.0.4 Beta update from the APK file given below.
Disclaimer: Indian government banned PUBG Mobile and PUBG Mobile Lite apps so we are not advised the users in that country to download this applications.

The first will be based on the Halloween theme and output on 23 october, while the release date of Payload 2.0 mode is not yet known.
Players can play these modes in the latest beta update and then send direct feedback to the developers of the Global PUBG Mobile version. In this article, we discuss the detailed beta update download process for this game.
The beta version are helpful to developers to make effective and avoid bugs in the global version. With this they will improve the gaming experience to the players.
Cookie Consent
We serve cookies on this site to analyze traffic, remember your preferences, and optimize your experience.
More Details
Oops!
It seems there is something wrong with your internet connection. Please connect to the internet and start browsing again.
AdBlock Detected!
We have detected that you are using adblocking plugin in your browser.
The revenue we earn by the advertisements is used to manage this website, we request you to whitelist our website in your adblocking plugin.
Site is Blocked
Sorry! This site is not available in your country.