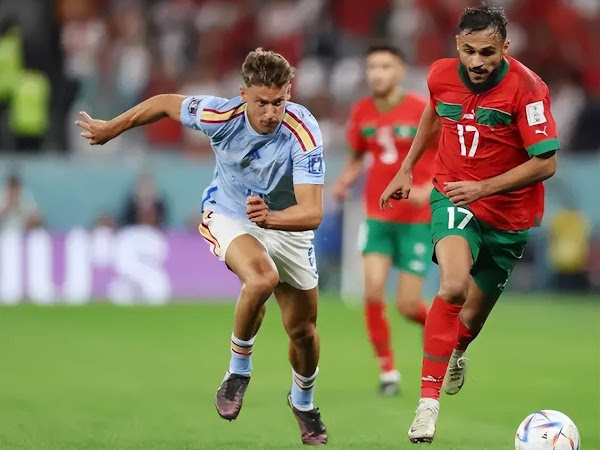 Spain has really proved with the 2022 Qatar World Cup 1/8 finals Spain loses its strength that the teams in the death group will die suddenly because they can't take penalties. It is not wrong to lose to Japan in the group stage. Even penalty kicks are worse than in Japan without practice, even if you really It is not easy to fail to score three penalty kicks without practicing penalty kicks.

If you only look at technology, historical matches, rankings, best results, and worth, Spain is sure to win. It's a pity that no matter how big the traffic is, you have to watch the work. No one would have thought that Spain's first knockout match would be so ugly.

The awkward jerseys of the two sides seem to be dreaming back to the knockout match of Uruguay 2-1 Portugal in the last World Cup, but Morocco is more stable than Uruguay this year, while Spain played more awkwardly than Portugal in this game.

Although it is an Arab country in northwest Africa, Morocco and Spain face each other across the sea. Like all neighbors across the sea, it can be said to be the most familiar stranger. It doesn’t matter if you don’t like me, but I have studied you for too long up.

This kind of feeling is like a knight with superb swordsmanship living next door to an inconspicuous attendant. One day, the two had a dispute. No matter how good kung fu is, it can be knocked down with one brick. Elegance needs to be effectively supported, and the ineffective fancy is not as solid as the simple and rude pig rushing in.

In the first half, Spain’s gaudy ball possession rate was 69%, and it was passed back and forth. As a result, the pass was like walking in the old man’s People’s Park for a long time. After seeing the shot 1-3, the threat was not as great as Morocco’s several attempts to counterattack in front of the goal. Morocco's active defense and the continuity of counterattack proved that it was not a fluke that they scored only one goal in the group stage, and the first place in the group was not picked up, but Spain lost its spirit. Call out uncomfortable. [Notes 2022] Capello's prediction and Ronaldo's show

Perhaps because of dissatisfaction with losing to Japan, or to prove that playing Morocco is not a real dish, Enrique adjusted the starting lineup and replaced Llorente. I don’t know if Enrique has watched the video of Morocco, but I seem to hear the phrase “Only these few people, he and the son-in-law are starting the game, can he play? Can’t play, no Do you know that ability!"

Regarding Spain's play style in the past few games, Morocco has already understood very well. Come and play 4-1-2-3, if you infiltrate, I will also infiltrate, if you counterattack, I will attack you, if you counterattack, I am sorry, I am faster than you. If you can play pass and control, then I will give you a confrontation to ensure the intensity, and then use short passes and high-speed counterattacks to blast Spain's right. Winger Boufal completed 5 dribbles in only halftime (although he can only dribble people).

Unlike Japan's old sixth stealing chickens, Morocco already belongs to the level of gangsters who know the routine.

In this way, the Spanish matadors became bulldogs in front of this Morocco, which can be said to be dirty and hard. Garvey, who was extremely spiritual in the first round, fought against Ashraf like a pressure cooker stolen by Morocco, affirming his momentum, but the result was nothing but a green jersey and 7 goals conceded in the half. Brilliant performance.

If it weren't for the collective defense of Bounu and Morocco, but offside first, Spain had almost no threat in the first half today. On the contrary, Mazraoui's cold kick accompanied by Unai Simon's buttery hand made Spain almost concede the goal .

In the 55th minute, Spain looked at the free kick and regained some feeling. Morata replaced Assen and laughed, and the son-in-law went off. Spain’s offense improved slightly. The decline in physical strength continued to push forward to create threats, but unfortunately, the effect was worrying.

Today's two sides are not without mistakes. On the contrary, both sides made too many mistakes today. In overtime, Morata, the highest center, was even required to pass the header. Both sides lacked the ability or luck to grasp the mistakes. Portugal v Switzerland preview: Can Ronaldo answer the doubters with his performance The Spanish pass The offensive pressure brought by the control will not even be reflected until 100 minutes later when Morocco's main players leave the field and the lack of tacit understanding between the players who did not participate in the joint training.

Morocco was unable to arrange a strong counterattack in the second half of the first half of overtime. They even regarded Unai Simon as Joe Hart and wanted to get kicked at the kick-off in the second half. When Spain's eighth corner kick was invalid and Saravia shot at the goal frame angrily, I don't know how many people couldn't bear it and wanted to fast forward directly to the penalty shootout.

Fortunately, Morocco’s penalty kick is much more reliable than Japan’s (Mori Yasuichi, read more and learn more), Enrique also showed a textbook-like substitution failure (Mori Yasuichi, he learned from you), It was Saravia who took the penalty kick. As a result, he hit the door frame as if he had a grudge for the first free throw, and the next player couldn't stand the pressure.

This kind of Spain is not worthy of sympathy. As a former world champion, being obsessed with pass control but not paying attention to center forwards is no longer suitable for this version. Even if there was a big victory, it could not conceal the embarrassment and embarrassment of leaving the field in the penalty shootout. The glory of the former world champion has become the shackles of constraints. They need to re-examine how Japan and Morocco, which were once inconspicuous opponents, defeated themselves. Take a good look back at the two consecutive World Cups where penalty kicks fell, why penalty experts can also stumble, and the reflection after the pain will be more thought-provoking.

Congratulations to the Moroccan team for reaching the quarterfinals! They used a classic whistle penalty to not only teach the Spaniards how to take a penalty kick but also taught them how to win. Morocco created a new history and entered the quarter-finals for the first time in team history. The best results in the World Cup, they have iron-blooded defense and big-hearted players, they deserve to go further in the World Cup.